Moncton school for students with learning disabilities won't close after all

The owner of a private Moncton school for students with learning disabilities says she has found a way to stay open this fall.

Rebecca Halliday announced in March that Riverbend Community School would be closing because parents couldn't afford the higher tuition and the province wouldn't provide financial support.

Halliday said she's now getting rental income for half of her space at the corner of Church and St. George streets, which was "one piece of the puzzle," but the community has also stepped up to help.

"My lesson that I've learned is that I need to reach out to community more in order to make this happen," she said. "This is our community school for kids with learning disabilities and ADHD and differently wired brains."

Lewisville Baptist Church, which one of the parents attends, for example, organized a Price Is Right-themed fundraiser and raised $1,100 within a week.

And a GoFundMe campaign raised more than $1,000 within 24 hours.

"And so the community started rallying around me and that's when I realized, like, if I reach out to the community and really start asking for what I need to keep the school open, I think I can do it."

Halliday said she is "moving on" from six years of trying to persuade the Department of Education to follow the lead of other provinces, such as Nova Scotia and Ontario, and create a tuition transfer program, which would allow the money allocated per student in the public system to travel with a student to the private school.

"It's such an easy model in my mind," she said. "I would like to remain hopeful, but it's hard."

She has reduced tuition this year to $10,350 and hopes to offset the costs by increasing fundraising efforts throughout the year. 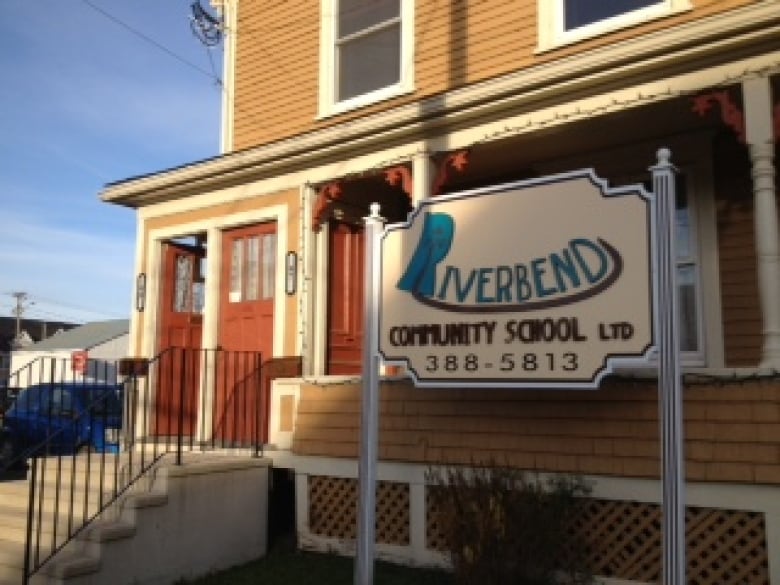 Programming at Riverbend Community School this fall will focus on literacy and math in the mornings and hands-on learning in the afternoons. (Vanessa Blanch/CBC)

Although New Brunswick's school system is renowned for its policy of inclusion for students of all abilities, Halliday contends many of her students fell through the cracks because department resources are focused on students with more severe issues.

Her students with learning disabilities "don't come across as students who need a lot of intervention. It's a quiet disability, and ADHD can be like that too. We think of kids with ADHD as, you know, I call it swinging from the chandelier. A lot of times they don't look like that."

And students with learning disabilities "don't need intervention 20 minutes, three times a week. They need the way that we teach, which is a neuro-diverse approach all day long in order to make change and to get better."

The goal is to help them get caught up academically, build up their social skills and emotional wellness, then get them back into the public system.

"A lot of time when you have a learning disability you come in really frustrated and really broken in terms of what you think you can do," she said.

"In our environment, when there's, you know, 10 to 15 kids and two teachers or three teachers, man, you get a whole new perspective on what you can do because you can sit until you master a skill. And so it's really neat that way."

Halliday said she has 12 students registered for the fall, compared to 15 this year. The maximum number she can handle with two teachers and an educational assistant would be 16 to 18, she said.

She has tweaked programming to better meet their needs. She called it "getting back to basics," focusing on literacy and math in the mornings and then hands-on learning in the afternoons, individually tailored to what a student wants to explore.

Back in March - Riverbend Community School director Rebecca Halliday announced that her dayschool was closing. Four months later, Halliday explains how she's been able to open the doors again. 11:02

Halliday said her students have an interesting way of thinking about the world around them and wants to nurture that.

She hopes to give them the "classroom of their dreams" this fall with money raised through the GoFundMe campaign, complete with flexible seating, standing desks, a smart board, and a Spark electric bike.

With the right support, Halliday believes her students can be the "thought leaders, entrepreneurs and tradespeople" of tomorrow.

She said she plans to focus on offsetting costs as much as possible and asking for help when she needs it to keep the school open.