A rash of online threats has forced an increase in security at Moncton's tent city.

Lisa Ryan, a community development co-ordinator for the Greater Moncton Homelessness Steering committee, said people with weapons have shown up at the encampment.

"[They were] blowing right through the barricade, wanting to go in and hurt people," she said. "They were showing up with weapons, pipes. It was becoming an issue."

Police were sent to the site but no arrests were made.

At the end of June, the City of Moncton added security to identify who's going in and out of site.

Now, people who live at the tent site have to register at the gate with Moncton's ReConnect Street Intervention Program, state their reason for entering and have to be escorted on and off.

"If you're refusing to follow those specific terms, then unfortunately you're not going to be allowed on the site," she said.

"Tenters can move freely in and out of the site. Restrictions are to make sure that only those (agencies, individuals or organizations) with a specific purpose access the site," said Isabelle LeBlanc, a spokesperson for the city, in an emailed statement to CBC News.

"There have been a number of online threats toward the individuals living in the temporary site, and it is important to keep track of who is there and why to maintain everyone's safety and security."

"Not any other one organization is going to end homelessness," Burrell said. "It takes all of us reaching out so that we can grab as many people as possible."

Burrell was denied access to the site earlier this week, even though he knows many people who live at the encampment.

Burrell was at the site for a documentary about homelessness in Moncton. He was trying to arrange a screening of the documentary and talk to a man about housing.

"The thing is, when I'm going in to talk to someone about housing, that's not a message I'm going to relay to a security guard or anybody else," he said. "That's personal information."

He said he's been going to the site for five years, bringing sleeping bags and tents for people staying there.

"All of a sudden that site's on lockdown," he said.

While he understands the city has concerns about security and safety, he said it's "a bit ridiculous" that he wasn't allowed in.

But Ryan said the bump in security is a proactive way to ensure the site is run properly.

"At the end of the day the most important thing is that people's safety is number one," she said.

Trevor Goodwin, director of the YMCA of Greater Moncton's ReConnect Street Intervention program, said residents have been receptive to the two security officers at the tent site.

They've created a positive rapport with the officers and don't have to worry about intruders rummaging through their belongings.

"They feel safer, especially in the evening and in the middle of the night, knowing that there's people there looking out for their best interests."

The tents have popped up on Albert Street since Moncton's emergency out-of-the-cold shelter closed April 1.

There are about 45 people and 33 tents on the site.

The land where the temporary site is located belongs to the city and is the site of the future RCMP station for the Codiac RCMP.

Those living in tent city will be asked to relocate to the new House of Nazareth shelter at 72 Albert St., when the building opens in August.

The House of Nazareth charity will operate close to 180 beds instead of the 120 beds that were initially planned. The shelter will also be located on Albert Street.

He said the group has looked to a shelter in Montreal as a model.

"We're not just going to manage the homelessness situation, we need to find solutions," he said.

House of Nazareth is a traditional shelter that houses, feeds, and gives people clothing, but during the day, people are forced to leave the facility. 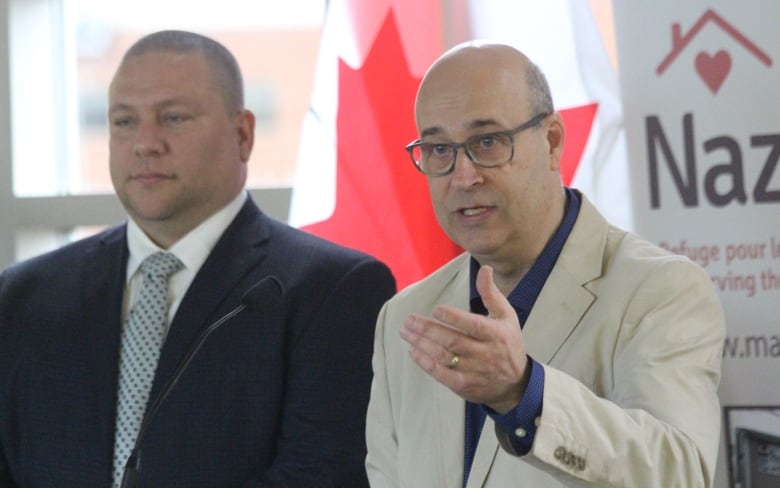 Jean Dubé, executive director of House of Nazareth, has suggested the new shelter could lead to the end of homelessness in the city. (Shane Magee/CBC)

"That's bringing everything under one roof," he said.

Dubé said organizers will also be travelling across Canada to look at other models to better serve Moncton's homeless.

"We're confident in our mission," he said.