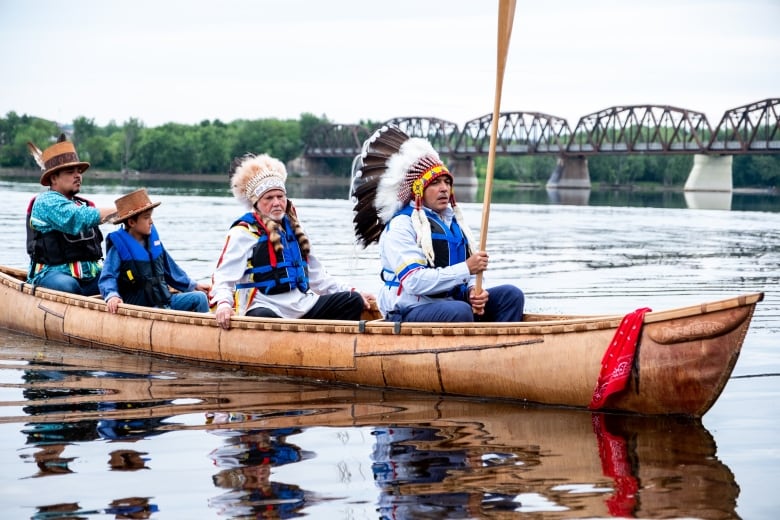 The three chiefs started in St. Mary's at the old powwow grounds and paddled across to the greenery at the Beaverbrook Art Gallery, where a small village of vendors has been set up. 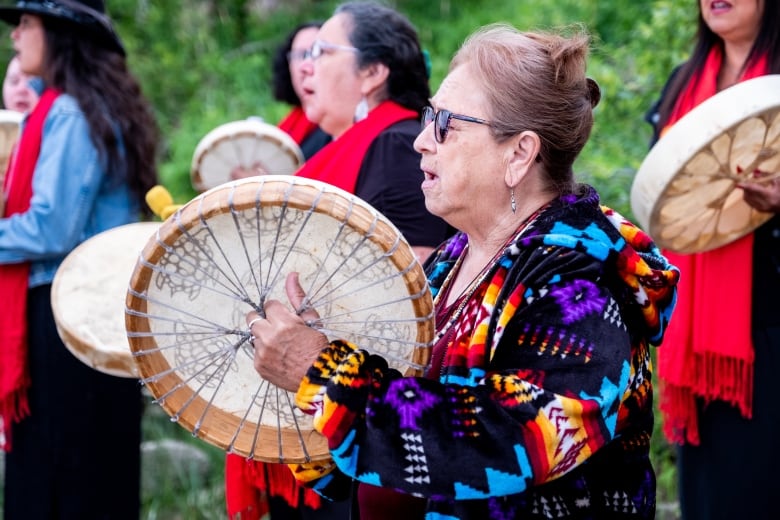 The Sisters of the Drum group welcomed the three chiefs to the south side of the river singing Wolastoqey songs. 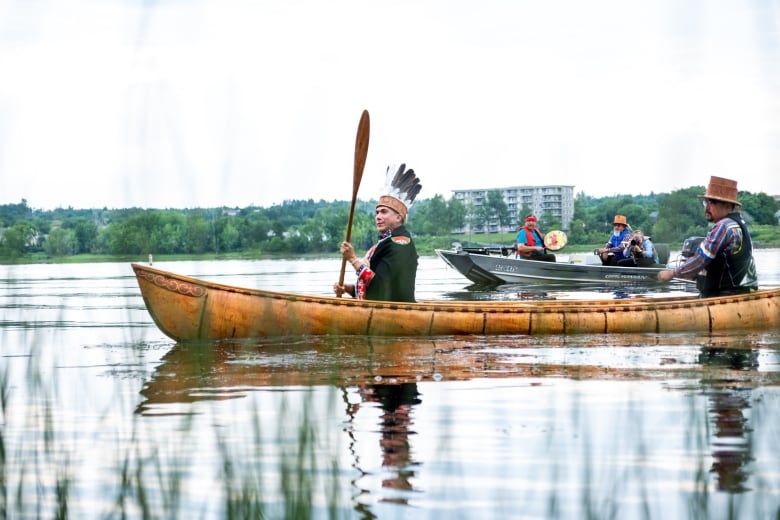 The chiefs were accompanied by the Brooks family from Sitansisk (St. Mary's First Nation) who make the birchbark canoes and helped with the restoration of the Grandfather Ukwiten (canoe), which is on display in the Beaverbrook Art Gallery. 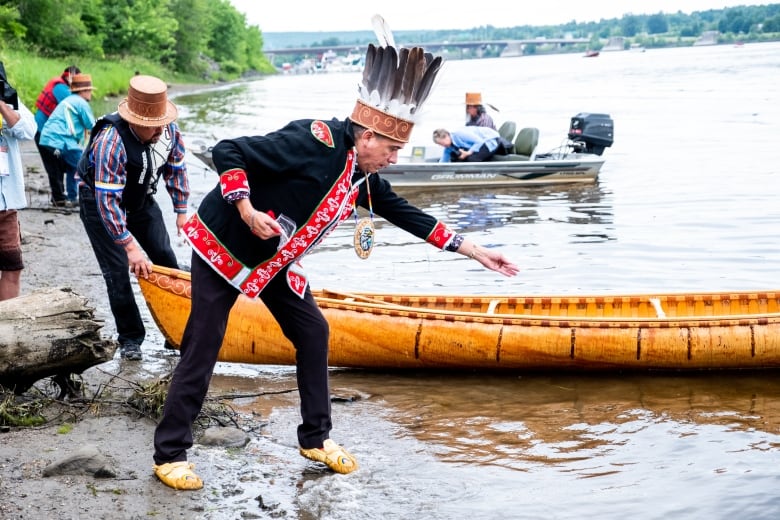 As part of the ceremony, the chiefs offered tobacco to the Wolastoq. The river is significant to the Wolastoqiyk and means "the beautiful and bountiful river." All of the six Wolastoqey communities in New Brunswick are along the Wolastoq. 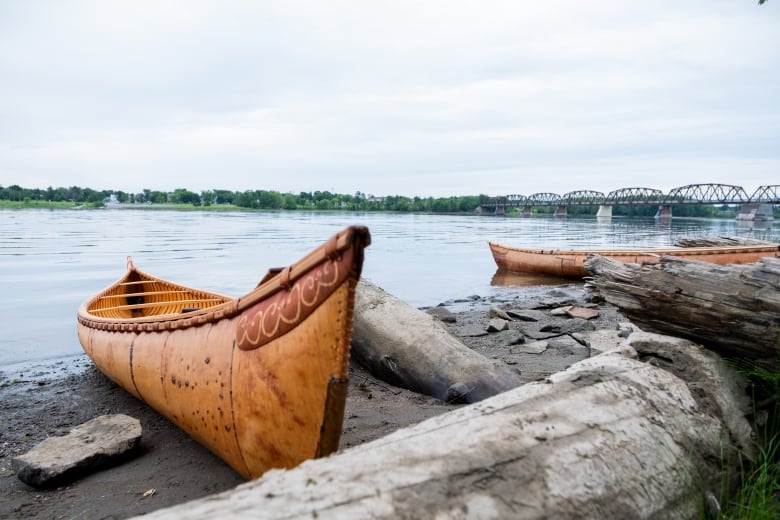 The two birchbark canoes were used last year when the Wolastoq Grand Council did a ceremony to reclaim the name of the Wolastoq. 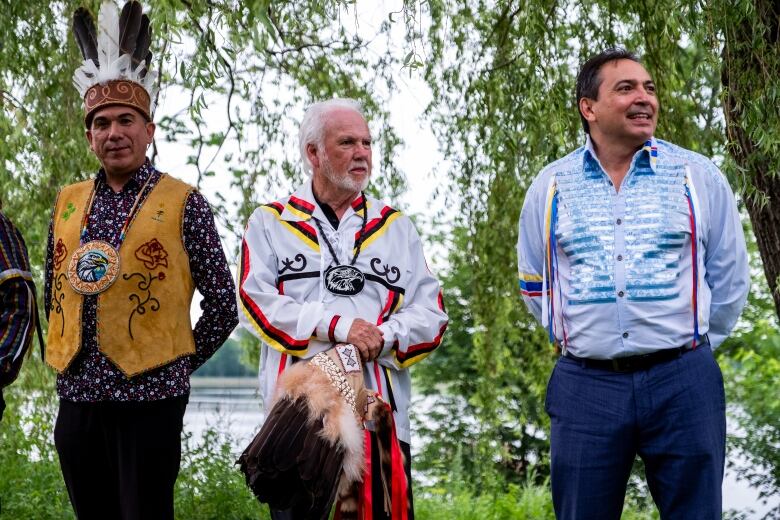 Polchies, Augustine and Bellegarde stand and watch as the Sisters of the Drum sing and elder Maggie Paul does a water ceremony to welcome all the assembly delegates and pray for those who don't have clean drinking water. 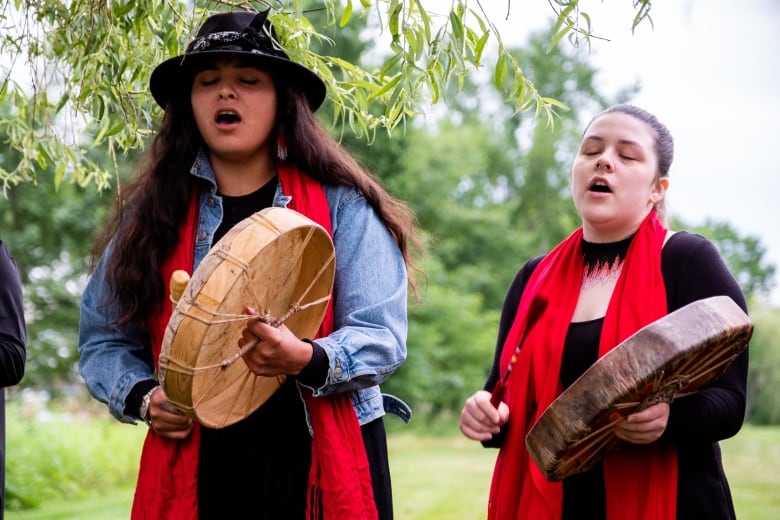 Pictured are two members of the Sisters of the Drum group, who sang the "Wolastoq Song" as part of the ceremony. It's a song about the river that was written by Gwen Bear. 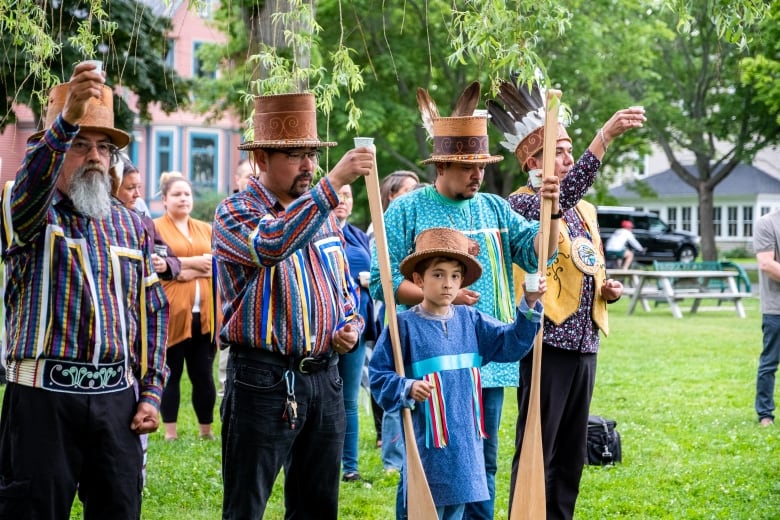 The Brooks family took part in the water ceremony. Water was poured into small cups and given to the people in attendance to pray on. 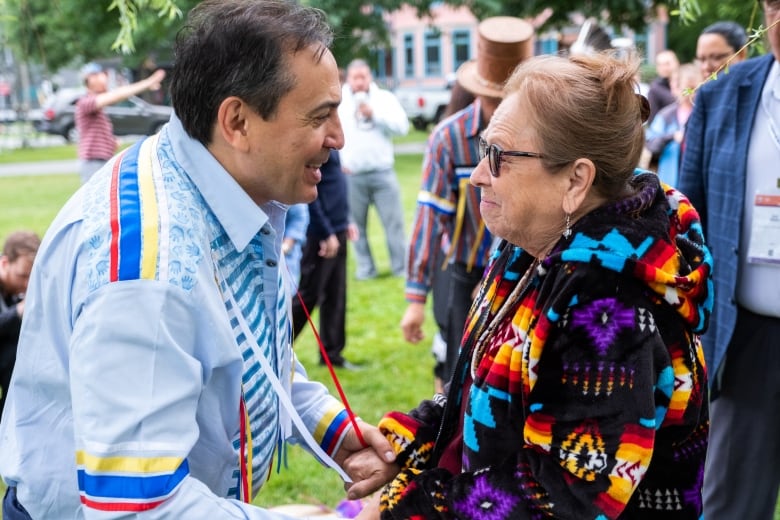 Bellegarde thanks elder Paul for the water ceremony and welcoming him to the territory of the Wolastoqiyik. 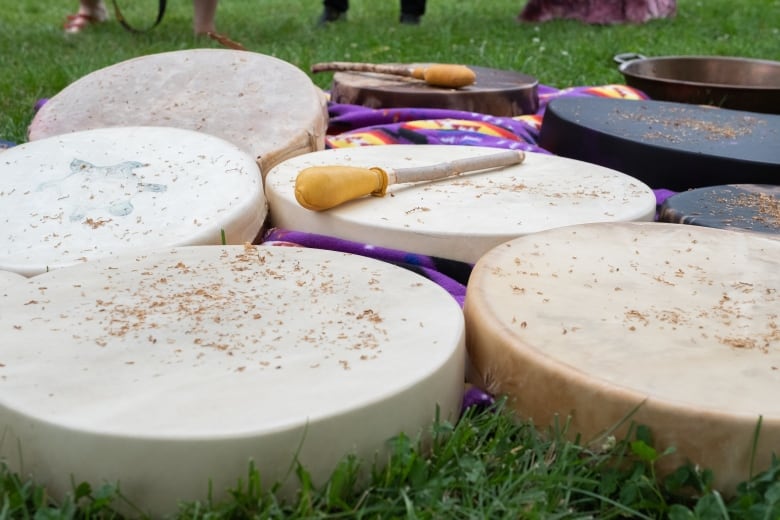 Tobacco is a sacred medicine to many Indigenous nations and is used for prayer. It is placed on the drums because they are used to help people heal through song. 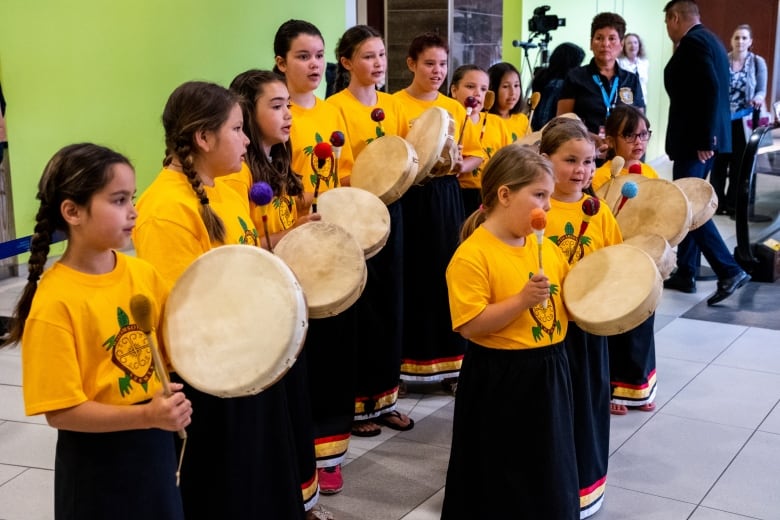 After the ceremony was completed, the chiefs and those in attendance made their way to the Fredericton Convention Centre where the assembly was set to begin. The chiefs were welcomed in the door by the Chief Harold Sappier Memorial Elementary School drum group from Sitansisk. 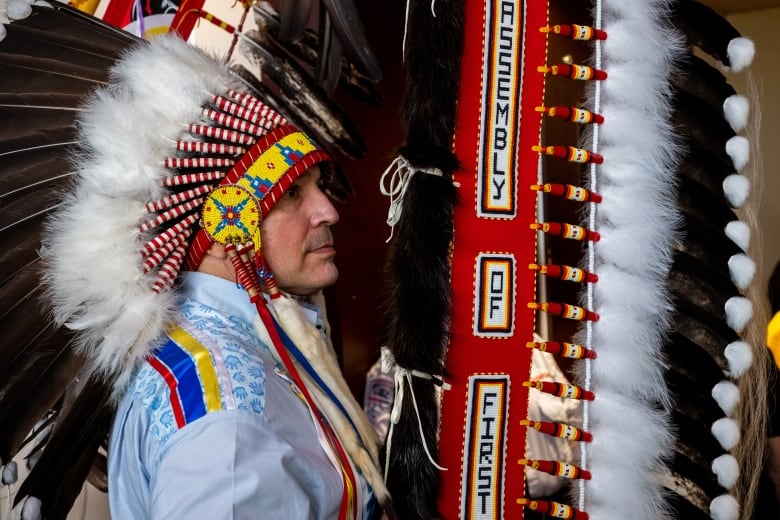 Bellegarde carried the Assembly of First Nations banner for the grand entry of the assembly's opening ceremonies. 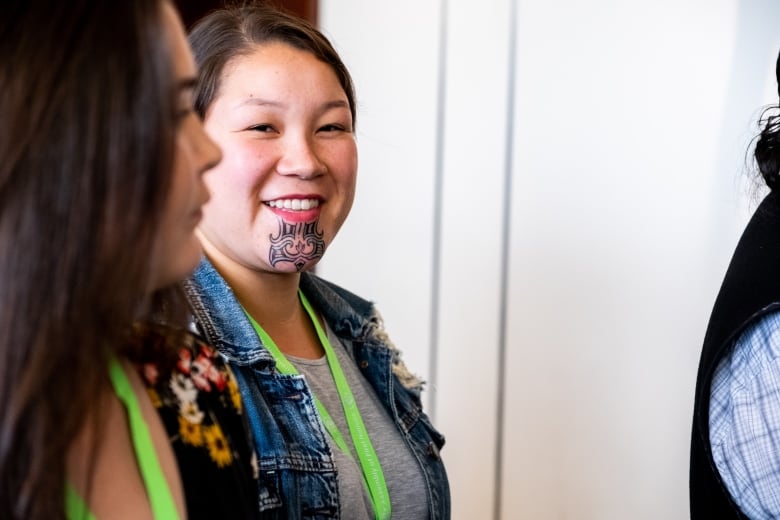 The Muskrat Singers sang an honour song and a flag song to welcome in the grand entry parade. Muskrat Singers member Percy Sacobie designed the 40th annual assembly's official poster, which is on display at the Beaverbrook Art Gallery. 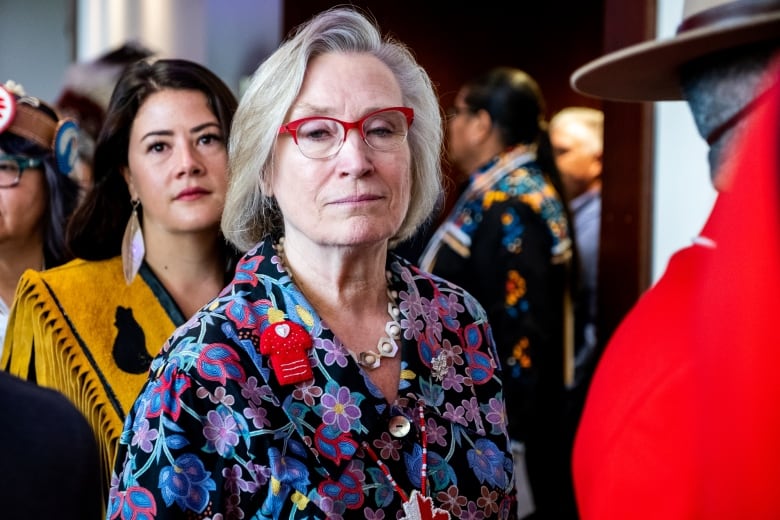 Carolyn Bennett, minister of Crown鈥揑ndigenous relations and northern affairs Canada, was in attendance and spoke later in the day. 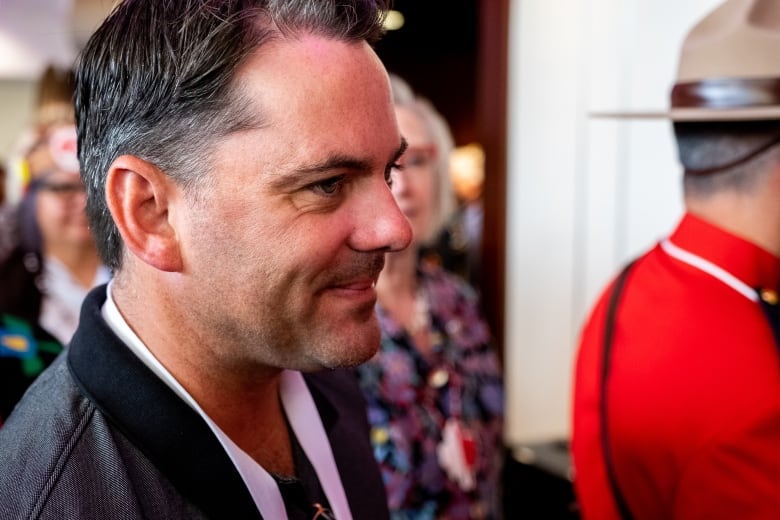 "We need to invest in education and reviving languages" Stewart said during his opening remarks. 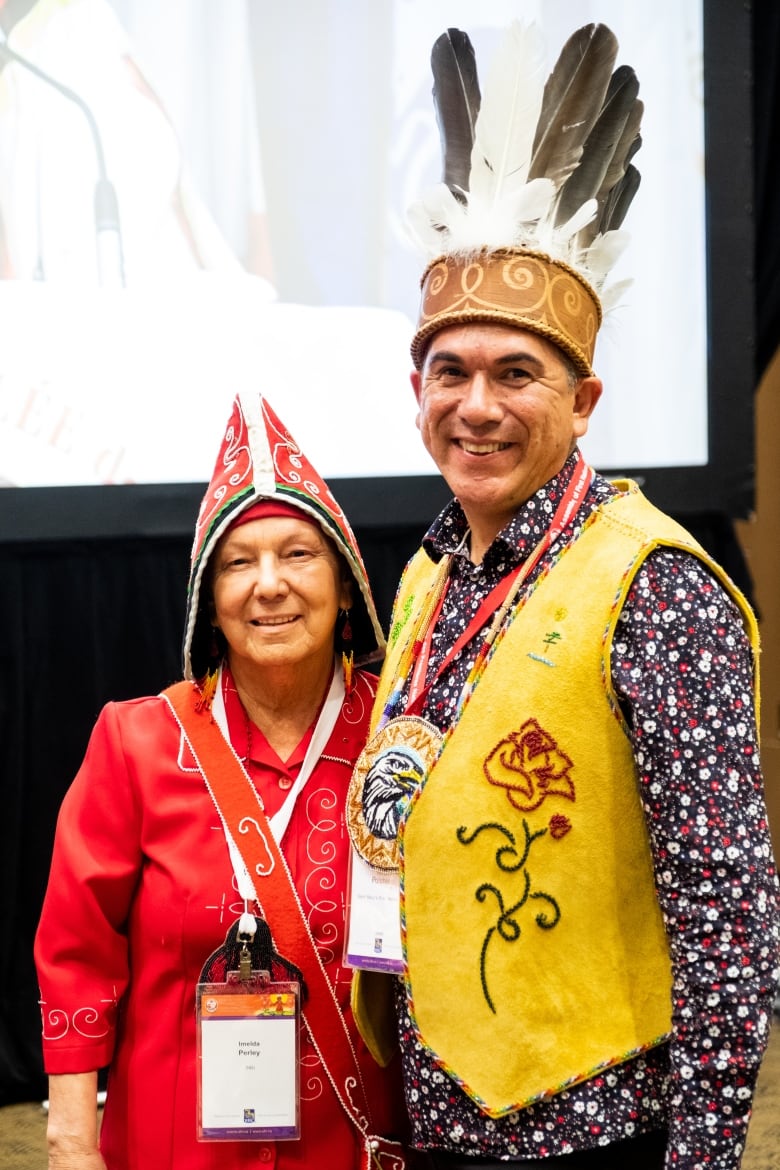 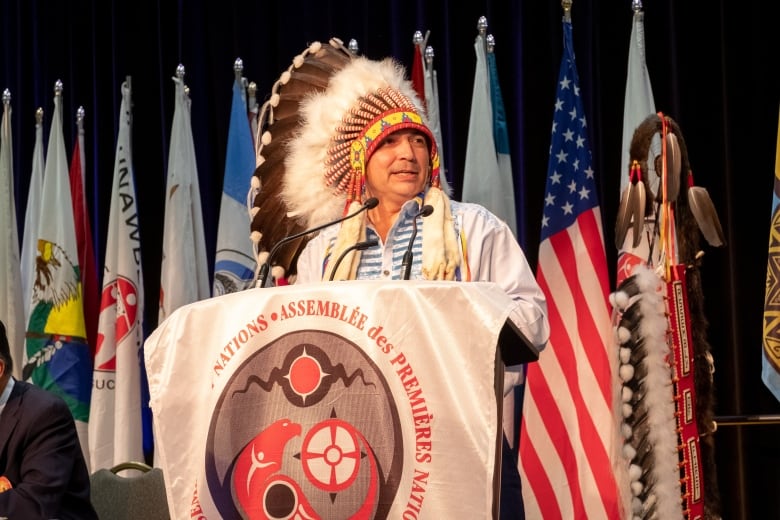